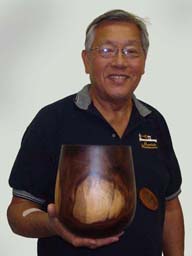 Gordon Tang’s traditional Hawaiian shapes are widely appreciated by collectors of Hawaiiana both for functional and decorative purposes. A number of people collect his bowls for poi supper, luckies!

English Yew is small to a medium-sized evergreen tree with spreading branches and slightly drooping branchlets. The tree can grow to an average height of 33 feet to 66 feet with a deeply fluted trunk approximately 6 feet in diameter.

The bark is reddish-brown with purple tones and tends to have a peeling texture. The Yew is considered one of the oldest trees in Northern Europe with a lifespan that can range from 400-600 years old. The needle-like leaves of the English Yew are poisonous. The English Yew is one of the few conifers that can easily produce new growth once the branches are cut.

The sapwood is usually a thin band of a pale yellow or tan color. The heartwood tends to be an orangish-brown, at times a darker brown or purplish hue.

The dimensions listed in the ‘additional information’ tab includes packing for shipment.

Please take good care of each other. Be well, stay well, aloha no.